Expected Learning:
--To learn the fairy tale The Four Dragons and its relevance to the four main rivers in China.
(You are required to complete Task 1,2,3 in this lesson.) 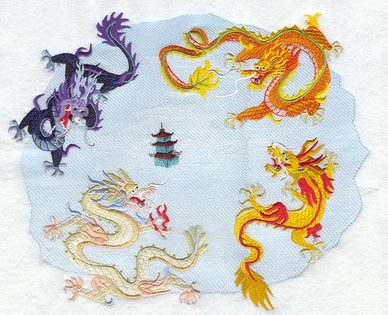 Once upon a time, there were no rivers and lakes on earth, but only the Eastern Sea, in which lived four dragons: the Long Dragon, the Yellow Dragon, the Black Dragon and the Pearl Dragon.

One day the four dragons flew from the sea into the sky. They soared and dived, playing at hide-and-seek in the clouds.

"Come over here quickly!" the Pearl Dragon cried out suddenly.

"What's up?" asked the other three, looking down in the direction where the Pearl Dragon pointed. On the earth they saw many people putting out fruits and cakes, and burning incense sticks. They were praying! A white-haired woman, kneeling on the ground with a thin boy on her back, murmured:

"Please send rain quickly, God of Heaven, to give our children rice to eat."

For there had been no rain for a long time, the crops withered, the grass turned yellow and fields cracked under the scorching sun.

"How poor the people are!" said the Yellow Dragon. "And they will die if it doesn't rain soon."

The Long Dragon nodded. Then he suggested, "Let's go and beg the Jade Emperor for rain."

So saying, he leapt into the clouds. The others followed closely and flew towards the Heavenly Palace.

Being in charge of all the affairs in heaven, on earth and in the sea, the Jade Emperor was very powerful. He was not pleased to see the dragons rushing in. "Why do you come here instead of staying in the sea and behaving yourselves?"

The Long Dragon stepped forward and said, "The crops on earth are withering and dying, your Majesty. I beg you to send rain down quickly!"

"All right. You go back first, and I'll send some rain down tomorrow." The Jade Emperor pretended to agree while listening to the songs of the fairies.

"Thanks, your Majesty!" The four dragons went happily back.

But ten days passed, and not a drop of rain came down.

The people suffered more, some eating bark, some grass roots, some forced to eat white clay when they ran out of bark and grass roots. 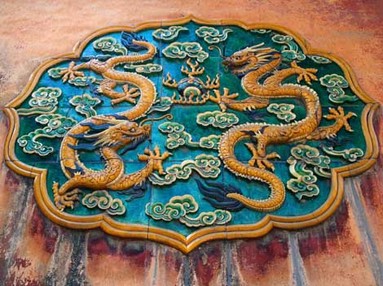 Seeing all this, the four dragons felt very sorry, for they knew the Jade Emperor only cared about pleasure, and never took the people to heart. They could only rely on themselves to relieve the people of their miseries. But how to do it?

Seeing the vast sea, the Long Dragon said that he had an idea.

"What is it? Out with it, quickly!" the other three demanded.

"Look, is there not plenty of water in the sea where we live? We should scoop it up and spray it towards the sky. The water will be like rain drops and come down to save the people and their crops."

"Good idea!" The others clapped their hands.

"But," said the Long Dragon after thinking a bit,   "We will be blamed if the Jade Emperor learns of this.

"I will do anything to save the people," the Yellow Dragon said resolutely.

"Let's begin. We will never regret it." The Black Dragon and the Pearl Dragon were not to be outdone.

They flew to the sea, scooped up water in their mouths, and then flew back into the sky, where they sprayed the water out over the earth. The four dragons flew back and forth, making the sky dark all around. Before long the seawater became rain pouring down from the sky.

"The crops will be saved!"

The people cried and leaped with joy. On the ground the wheat stalks raised their heads and the sorghum stalks straightened up.

The god of the sea discovered these events and reported to the Jade Emperor.

"Go and get four mountains to lay upon them so that they can never escape!" The Jade Emperor ordered the Mountain God.

The Mountain God used his magic power to make four mountains fly there, whistling in the wind from afar, and pressed them down upon the four dragons.

Imprisoned as they were, they never regretted their actions. Determined to do good for the people forever, they turned themselves into four rivers, which flowed past high mountains and deep valleys, crossing the land from the west to the east and finally emptying into the sea. And so China's four great rivers were formed -- the Heilongjian (Black Dragon) in the far north, the Huanghe (Yellow River) in central China, the Changjiang (Yangtze, or Long River) farther south, and the Zhujiang (Pearl) in the very far south.

Task 2 (China's geography--The Four Main Rivers)
Research the following questions on the Internet and organize your answers in the workbook. 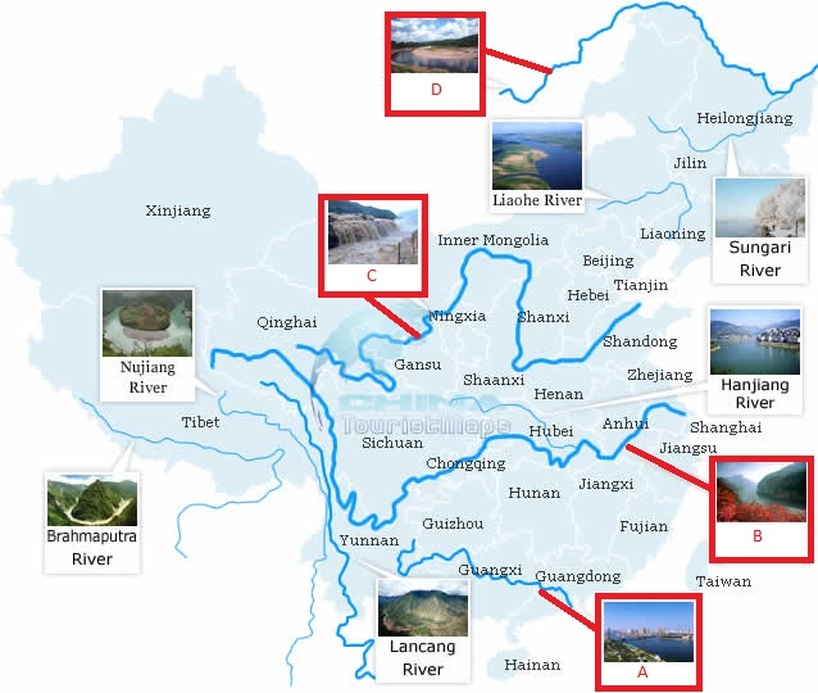